This is the last of the three-part collaborative storytelling experiment, where you, the reader, helped choose the way the story continued.

To read PART I of the three parts, read HERE.

To read PART II of the three parts, read HERE.


WINNING VOTES from Part II resulted in "Fight the Enchantress and Interrupt the Spell" (The last paragraph of Part II is repeated for continuity)....


THE ENCHANTRESS OF TANGLEWOOD ~ Part III 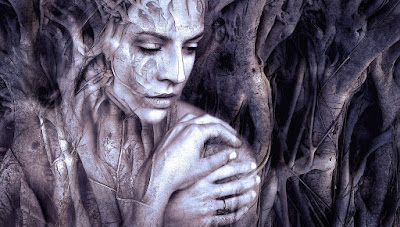 (Image by Stefan Keller from Pixabay)


The Enchantress waved her birchbark hands, whispering arcane words in a chant. A fog formed around them both. As Tarynn looked into the fathomless eyes of the entity, she began to feel a tingling sensation inside of her and knew she was changing.

"No!" Tarynn yelled, and slapped the Enchantress with the yolky mistletoe.

The Enchantress cried out with the voices of a hundred animals in pain, her face falling apart like splintered wood. The spell had worked.

"You're not in league with the Green God!" Tarynn yelled. "You're a liar!" She grabbed the Enchantress's outstretched arm and spun her around, slamming her into the trunk of a fir tree. The body of the Enchantress fell apart, the leaves and bark and lichen that composed falling to the ground.

But from all around her, Tarynn heard the woods come alive. Myriad beasts moved in the underbrush and among the boughs. A wind cropped up. And on the wind came a furious voice. "You have wronged me, child! Now you must pay the price!"

Tarynn turned a circle, unsure of which way to go, as the animal noises grew louder, closing in.

Dusk had come. And as Tarynn looked about her, her heart pounding in panic, she saw something that gave her hope. A bright star shone brightly through a small gap in the canopy. No, not a star. The planet Venus. It was a guide. She now knew which way was west, and from that, which way to get out of the forest!

And then the creatures emerged from the shadows. Birds flitted, angry chirruping and swooping down at her. Squirrels and chipmunks ran down the trunks and across logs. Then, from the darkest shadow, came a deep and perturbed grunt as a massive black bear emerged. Tarynn shrieked and backed up.

But she had one last card to play. She reached into her bag and pulled out the butane lighter.

"You're made of the woods, bitch!" Tarynn said. "So I'll burn you down!" She knelt and lit the litter on fire.

"Noooo!" the voice of the Enchantress wailed. The wind picked up, but it only seemed to fan the flames.

The animals cried out as one and ran from the fire. Tarynn ran as well, as the flames grew quickly behind her. She crashed through ferns and over logs. Tripped. Caught herself. Fled as fast as she could through the foggy wood.

The air whooshed as, behind her, the wall of flame grew like a wall, catching the dense undergrowth.

Tarynn ran as fast as she dared, over a hill and down into a vale until, at last, she careened out of the woods. She emerged into a field near the outer subdivisions of town.

Tarynn didn't stop until she reached a road. Then, turning, she watched as the wildfire grew. Within hours it had encompassed the entire forest in a conflagration unseen for a hundred years. She could still hear the wailing of the Enchantress.

A week later, after fire teams had extinguished the fire and it has smoldered and grown cold, Tarynn, dared to return. Only one slim area had been untouched: a narrow gorge with a stream gurgling through its center. And there, just over the tenuous banks, on a ledge of overgrowth, was a patch grown thick with chanterelle mushrooms. She cut all but a dozen. A peace offering to the Enchantress, just in case. The woods would grow back, after all.