How Much Bloodshed Is Tolerated in Science Fiction and Fantasy Novels? 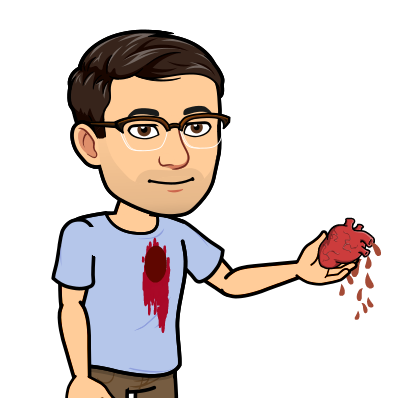 The level of tolerance increases significantly when you consider thrillers of any sort. You can't have gunfights and martial arts duels without at least some pain and bloodshed, reserved mostly for the bad guys, of course. The range of tolerance here is very wide, so as a writer and a reader you have to have an idea of the subgenre and the author beforehand. And then there's horror, which takes a giant, blood-splattering leap upward on the scale. Even with authors like Stephen King you expect some grisly scenery and description, and that's not even the sort of "body horror" or "grimdark" subgenres that I think is increasingly popular. (As an aside, it's strange to me that this kind of severe bloodshed is more popular in horror movies than in books, but then maybe it's because those who find satisfaction or entertainment in such imagery are more visual than imaginative?). The stories in my horror anthology, Around the Corner from Sanity, run the full range from no blood to gore-fest.

But what about science fiction and fantasy? It seems to me that these genres fall into a sort of gray zone. I read and write in these genres, but even I have a hard time putting a finger on the preferences of the reading public. Again, there's a wide scale and as a reader you sort of have to know the author beforehand. I can't remember any reference to blood at all in Tolkien's books, despite all the battle scenes, for instance. Frank Herbert described brutal acts in Dune but only in a few scenes did he go into details. But other, more modern authors I've read, such as Dan Simmons, don't shy away from it (the creature known as the Shrike in his Hyperion novels still elicits a tantalizing shiver for me).

So I put a poll on Twitter to get some feedback on this. I asked, "#fantasy and #scifi #book fans, What level of bloodshed to you tolerate in your novels?" I expected most answers to fall somewhere in the middle, maybe skewing slightly toward the more violent end. 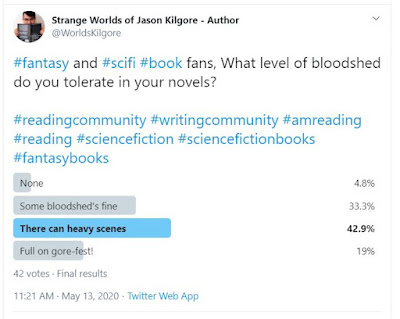 As you can see, there is, indeed, the sort of distribution that I thought, with only about 5% voting "none", then increasing to 33% and 43% for "some bloodshed's fine" and "there can be heavy scenes," respectively. I was surprised by the number of people who voted for "full-on gore fest!" (19%). I figured it would be down around 10%.

Maybe I shouldn't have been surprised. I mean, I personally have a very high tolerance and sometimes prefer the more bloody violence, as long as it fits the tone of the overall book and the plot.

In the fantasy novels I've written, there are only a few scenes that get bloody, in a PG way, and no real "gore", though I allow myself freer space with some of my fantasy short stories. But in my space opera novel, which is written with a sort of pulp-fiction tone, some action scenes are pretty graphic and would be R-rated if made into a movie (not to mention some X-rated sex scenes!).

As a writer, I'll say that the guiding principles related to the violence to include are: what is the interest of your target audience, and is it necessary for the plot and characterization?

How do you feel about bloodshed in sci-fi and fantasy books? Leave a comment!