Results from my poll on what scares you the most

What scares you the most?

I ran a Twitter poll asking which of these things scares horror book fans the most: creepy clowns, evil children, manipulative demons, or shadowy ghosts. 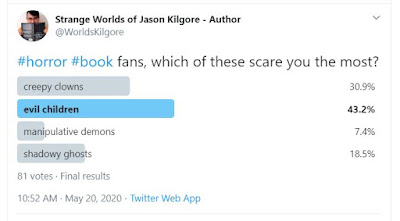 I find it fascinating that people find evil children the scariest, followed by creepy clowns.

If you look at mythology, eerie folk tales, or real-world accounts, it's usually the opposite; demons and ghosts seem to prevail.

I have a couple theories around this. First, mythology and folk tales reflect the more religious nature of older societies. I think, in the modern Western world, we are less apt to fall back on religion, and thus are less likely to dwell on demons and the devil, and maybe also less fearful of an afterlife and ghosts.

Second, real-world stories of ghosts, and even "demonic hauntings", are now relatively common, thanks in part to reality TV ghosthunter and paranormal shows and a long publication history over the decades. Maybe we've become used to them?

A third theory I have is that we may find more fearful those things that we would normally presume are harmless, like small children and babies, or clowns, but which have been perverted by supernatural forces. I'm convinced this is the most important of my theories.

I once turned harmless little rabbits into vengeful spirits, in my novelette "Rabbit Cry" (a story in my my book, Around the Corner from Sanity). I think it's the creepiest story in the anthology.

I wonder... what other seemingly "harmless" beings I could pervert into a good horror story?

What do you think? What other harmless creatures/entities/forces do you think could be a source of fear?