Dragon of the Federation COVER REVEAL and Promo!

Exciting news! I'm releasing my third book. This one is a fantasy, and the first in a series, the Heartstone series.

DRAGON OF THE FEDERATION

How far would you push yourself to save the world?

Ingal Jehai is an ancient Gold Dragon who rules over the White Lands Federation, but at over two thousand years old, his age wears on him. A young but powerful female mage, Torra Com Gidel, ventures to Ingal’s palace to deliver a dire warning from wrathful gods, pushing the limits of her courage. When an elvish prince is assassinated in Ingal’s court, the dragon and the mage team up to investigate. As war brews between three nations, the pair uncovers a vast conspiracy by the elves to let loose domineering gods upon the land, aided by the ruthless Iron Dragon, a vicious elvish warrior-cleric, and powerful renegade spells. If Ingal and Torra fail to stop the scheme, the world of Irikara –  and its wild magic— will be forever lost.

Available for PRE-ORDER NOW for only $0.99 until it releases on October 1. 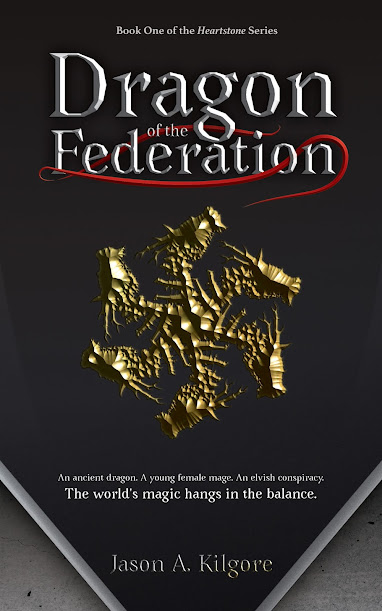 Email ThisBlogThis!Share to TwitterShare to FacebookShare to Pinterest
Labels: fantasy, my novels, my writing